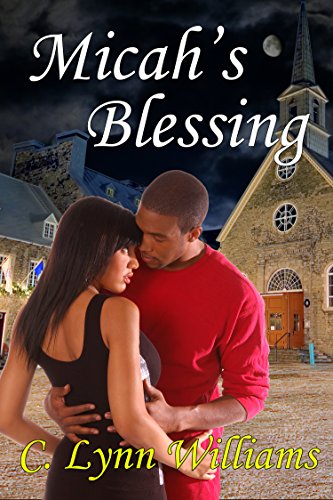 Astrid Miller loves and believes in God. She also believes in the enchantment and wonder of Christmas, but her world and faith are shaken when she loses her job, her home and very nearly her life.

Michael Wynn has one holiday wish, to be a husband to the woman he loves and if he's an instant father that's even better. However, he'll have to have enough faith to see them both through this holiday crisis.

“Stupid, stupid man!” Astrid Miller muttered as she drummed her leather-clad fingers on the steering wheel.

She eased her mini-van into the snow-clogged street, the vehicle skittered sideways as the wheels fought for stability. She huffed, her warm breath a wispy stream in the icy winter air.

Astrid fought back tears as she inched her car forward. The swish-swoosh of her wipers battled back the heavy white flakes racing from the sky like rice poured from a bucket. At any other time, she would admire the beauty and contrast of white lacy snow against the inky velvet, but tonight she wanted to hop in her bed, pull the covers over her head, and not come out until New Year’s and that might not be long enough.

Why did he have to propose? Astrid hit the button for the defrost, hoping to coax the glaze and fog from her windshield. She tapped the brake pedal, the ABS clicking as the van slid to a controlled stop at an intersection. She swiped moisture from her face and shuddered a breath. What could be more romantic than a Christmas Eve proposal?

The light changed and she eased on the gas, her tires whining before they caught traction and lurched forward. She followed the line of red brake lights to the expressway entrance ramp.

She flicked a glance to her rearview mirror, straining to make out the dull glow of headlights behind her. Visibility was nearing zero. She increased the blower on the heater, the warm air beating back the moisture clinging to her windshield. Maybe she should’ve waited for the day after Christmas to get Lynn’s gift.

The teenage girl would’ve understood, and Astrid would have done just that if he hadn’t proposed. She exhaled and slowed her pace, allowing the car ahead to gain a little distance. She wanted to spend Christmas with her girls, not end up in a hospital or worse, leave them as orphans.

A sigh escaped her lips as the road cleared. At least they were moving along at a steady pace, but why did Michael have to propose? With the girls hovering above, they’d obviously known about the ring. She loved Michael, but marriage?

Glowing red lights brought her attention back to the road. Several vehicles merged on her right. As an SUV entered, it skidded and spun 360 degrees before plowing into a small pickup truck near the median and diving into the ditch.

She checked her mirrors and still couldn’t see beyond the headlights at her bumper. A glance out the side window showed traffic on the opposite side resembled snow covered night crawlers rather than cars and trucks. A shower of white added to the snow from the sky as someone else decided the median was viable parking.

“Does anyone want to get home for Christmas Eve?” she muttered and stabbed the radio volume button. The Emotions What Do the Lonely Do at Christmas flowed from the speakers. Goodness, even the radio DJ was conspiring against her. With a sigh, she switched the channel, finally settling on one playing, Grandma got run over by a Reindeer.

Traffic still inched forward like frozen molasses. She’d had enough of the interstate. It was time to exit the freeway.

Astrid pushed the blinker stick up and maneuvered into the already packed lane. Home. She just wanted to get home, but that meant giving Michael an answer. She groaned. He deserved an answer. The man was just like his name, a gift from God, but... That was the problem. She still doubted. A horn blared, drowning out the opening strains of Christmas Just ain’t Christmas, Without the One You Love.

She glanced around a moment before she was thrown against the seatbelt. Headlights collided with her rear bumper.

Great. Just great.“Really!” Just what she needed: an accident.

The snow abated enough to see the oversized King Cab responsible for the impromptu game of bumper cars. Four-by-four did not mean crash-proof. She should have stuck to the surface roads. Without taking her eyes from the road, she removed one hand from the wheel and reached in the passenger seat for her purse and phone.

Light bounced off the rearview mirror, blinding her. She tapped the brakes, steering toward the shoulder and a steep embankment. So far, so good. At least she could still drive home. Though, she didn’t relish waiting for the police, at least not tonight. She didn’t think it would be necessary for something so minor. She was already later than what she’d told her girls and they would be worried or shaking Christmas gifts.